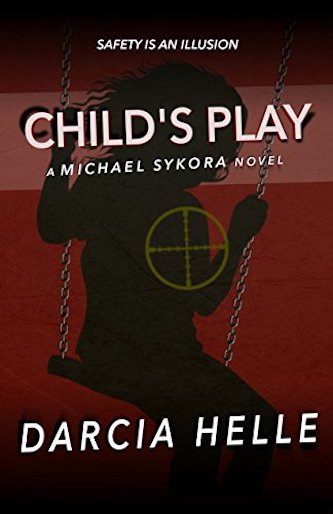 The story of a child who is kidnapped for the purpose of selling her to criminals who trade in human trafficking.

A little girl is stolen from her yard and police have no leads. Hope dwindles with each passing hour.

The desperate parents hire Michael Sykora to find their daughter and to kill anyone involved in taking her. Michael and his team discover this case has roots far deeper than a single kidnapping. Children are a commodity for the wealthy and depraved.

Following leads from daycare centers to the Darknet, this search is about to become personal.

The clock is ticking…

With the expansion of the Internet and the prolific exchange of information, we are becoming increasingly aware of how much evil there is in the world. When crimes like the one in this novel occur, we sometimes wonder why there aren’t ‘knights in shining armor’ to avenge the injustice.

The tools law enforcement use are readily available to all of those who work in the criminal justice system, but there are crimes that slip through the cracks. In today’s world, there are too many who don’t have any feeling for their victims and there is no limit to what they won’t do to carry out their crimes.

When such inhuman things occur, we can’t help but wonder what it would be like to summon someone like Michael Sykora to heap vengeance on the head of the criminal. This is a gritty novel that will enrage you and have you rooting for Sykora and his team.

There really are criminals like Daniel Miller and Tinker James, and they can make contact with other criminals on the Dark Net to carry out their crimes in relative safety. Child’s Play is the story of a child who was kidnapped for the purpose of selling her to criminals who trade in human trafficking. The parents hire Sykora and his team to get her back.

The story quickly expands to involve a collection of criminals who have no conscious. This is the fourth book in the Sykora series. Helle had hit her pace in this one. I hope there are many others to follow in this series.

I read the whole series of the Michael Sykora novels and this one certainly did not disappoint. I found it difficult to put down the book (or I should say “switching off my Kindle reader”). As always, Darcia Helle maintained the kind of pace that while not too quick was just right for this book’s tempo.

Darcia Helle’s talent lies in writing the kind of story that keeps the reader engaged with its many twists and turns. She also tackles the very delicate and taboo topics of pedophiles and child trafficking, which she treats with the care and the kind of foresight that gets the point across without being brutal about something that is extremely emotive. Kudos for this, Darcia!

Overall, I really enjoyed Child’s Play, and I personally feel that the whole series should be made into either a film or a series of films. Authors like Darcia Helle possess the kind of great talent that has been left untapped and which should be unleashed to the whole world.