Daily Review: Murder in the Forbidden City by Amanda Roberts 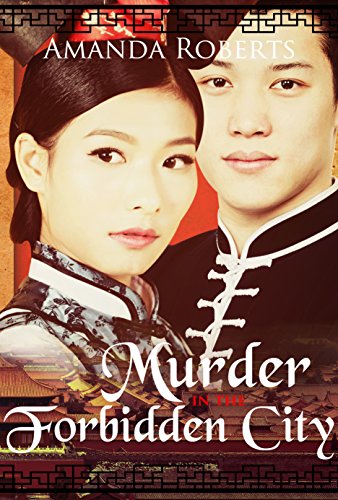 Set in Peking Forbidden City in 1867, the story offers a captivating way to discover life and intrigues in the Chinese court.

When one of the Empress’s ladies-in-waiting is killed in the Forbidden City, she orders Inspector Gong to find the killer. Unfortunately, as a man, he is forbidden from entering the Inner Court. How is he supposed to solve a murder when he cannot visit the scene of the crime or talk to the women in the victim’s life? He won’t be able to solve this crime alone.

The widowed Lady Li is devastated when she finds out about the murder of her sister-in-law, who was serving as the Empress’s lady-in-waiting. She is determined to discover who killed her, even if it means assisting the rude and obnoxious Inspector Gong and going undercover in the Forbidden City.

Together, will Lady Li and Inspector Gong be able to find the murderer before he – or she – strikes again?

Amanda Roberts is the successful author of historical novel Threads of Silk and the fun cookbook series Crazy Dumplings. She has lived in China since 2010. She is a full-time writer and editor and writes about her life at TwoAmericansinChina.com.

I was intrigued at how a Han man was supposed to investigate a murder in the Forbidden City when only Eunuchs are allowed to enter. Chinese culture, especially during that time frame, had so many class rules and customs that had to be followed.

The beginning of the book when we met Inspector Gong showed lots of promise. How was he to do his best work as he was commanded to do when he had so many obstacles in his path? When he met Lady Li and while his actions were to help discern if she may have any knowledge of the murderer he appears to her as rude and very coarse.

Their initial dealings had hidden tensions that arise when there is an attraction to the other person that you are trying to not let come to the surface. He pushes her to use her connections to assist him. She has to come out of her shell that she has lived in since the death of her husband. Lady Li has to admit things to herself and to others that are very painful.

The slow build as is customary with Chinese romantic relationships gets blown to pieces when these two get carnal with each other. Once that happens the book seemed to lose its cohesiveness and started meandering down different paths to keep the suspense going.

That said the book had a uniqueness to it along with the motive for the murder and the weapon of choice that was used. It was great to see behind the scenes intrigue of life at the Court, the petty games, gossip and bribes that are always abundant in this type of society. Women had very regimented lives and they had to follow certain rules no matter their desires.

VERDICT: Off the beaten track historical mystery! Set in Peking Forbidden City in 1867, it offers a captivating way to discover life and intrigues in the Chinese court.

Murder in the Forbidden City sounded so different that I decided to read it.

Imagine a murder mystery set in Peking Forbidden City in the 19th century! It was all I expected.

We are in 1867. The book opens on the regent empress in tears: Lady Yun, 15, one of her ladies-in-waiting, was just found murdered. Inspector Gong has been called to investigate, but he faces a difficult challenge: as a man, he is not allowed access to the inner court.

A solution could be to ask the help of the victim’s sister-in-law, a former lady-in-waiting herself. But how can Gong, a man, and a Han, manage to convince a woman, a Manchu, for this delicate matter? However, if the killer is still at court, who knows if there won’t be another murder?

Time is of the essence.

I thoroughly enjoyed the suspense, the well-designed plot, with the unexpected motive for the murder, as well as the original murder weapon, though totally in keeping with the place and time.

As a historical mystery, the background was superb, with a lot of fascinating information on the Chinese society of the time, its customs, and the place and role of women; the difference of classes between Manchus and Hans; the clash between traditional Confucian and spreading Buddhist principles.

There were also allusions to a past conflict between the Chinese court and the White Devils, the British.

And finally life at court in the Forbidden City, with the role of ladies-in-waiting, eunuchs, court-ministers, wives, and concubines. And its jealousies, gossip, and bribes!

There were even some unusual details, such as a special recipe for contraception!

Please click HERE to find Murder in the Forbidden City on Amazon.