The Idle American: When faith and optimism share a double harness 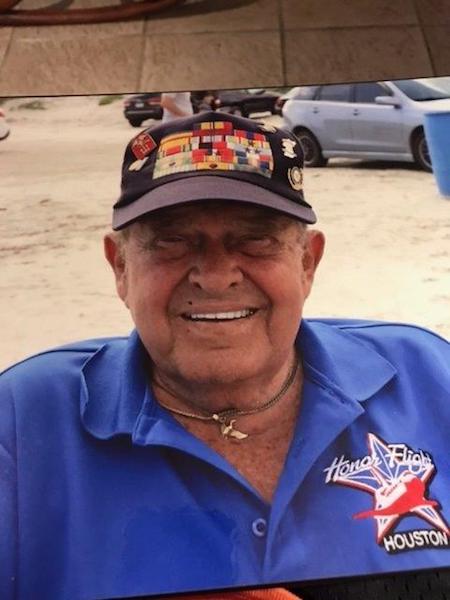 A life fully lived, and Eddie Janek is just getting started.

Surely, the passing of 75 years knocks the edges from the fib of a 15-year-old, as well as a military doctor who ignored height and weight requirements for a youngster on his second try to join the US Navy.

Eddie Janek, reared by his widowed mother during the Depression in West, Texas, stood 5’1” and weighed 98 pounds. He had “enlisted” several months earlier, but when authorities learned he was underage, he was sent home.

Soon, though, he hopped a train to Galveston–his home for the past 75 years. There, he “re-upped,” this time bolstered by “doctored” Catholic confirmation records. During four years in the Pacific, he landed at both Leyte and Peleliu, where he saw death “up close.” He distinguished himself during both WWII and the Korean War….

He has long treasured a sealed, glass-covered box of Presidential Unit Citations, and other medals from the US, Philippines and Korea. Presumably lost when Hurricane Ike ravaged the first floor of his home in 2008, his prized awards were returned a few weeks later.

Texas A&M students, helping with storm clean-up, found the muddied box across the bay from Janek’s home. They reported it to President R. Bowen Loftin, who then notified Janek of the students’ undamaged “find.”

A man whose ever-present faith and unbounded optimism share a double harness, Janek credits many folks who have helped him along the way….

First and foremost was his beloved wife Doris, who was claimed by Alzheimer’s disease in January, 2015–14 years after diagnosis. Comatose for more than seven years, Doris had Eddie at her side almost 24/7.

He left her from time to time to attend mass, but only when a trusted person could maintain the vigil.

He’s “Mr. Eddie” to most Galvestonians, and he’s clearly beloved on the island. Eddie has long been a colorful community figure. He coached youth baseball for 34 years and served 16 years as a County Commissioner until Doris’ disease took hold. “When citizens called his office, he didn’t invite them to come to the courthouse, he drove out to their place,” a friend said….

Janek has survived two wars, a stroke and a heart overhaul. He has also gotten hit by trains and caught under barges. Not until military service did he have access to toothbrushes, telephones and bathrooms. (Returning home a second time would have meant cotton-pickin’, and he “didn’t ‘cotton’ to that!”)

Much has changed. Seemingly a “kid again,” he recently made a tandem jump from an airplane, tumbling (with a professional) from 12,000 feet above his beloved Galveston Island. He made the jump on his 90th birthday. (Helping him celebrate was his friend, State Senator Larry Taylor, who joined him for the jump.) “I’ll jump again on my birthdays as long as I can walk,” Janek beamed. His three sons and their wives fear that he’ll do just that, and his six grandchildren are hoping he will….

Janek, who dutifully looks after his roses, keeps his 1964 (and a half) Ford Mustang convertible in spic-and-span condition. He drives it from time to time, and before you ask, it is indeed red.

Attending a social event recently, he spotted a group of women “in their 60s.”

Interrupting, he said, “Ladies, I’m a widower, and I’m lonely.  Do any of you have mothers or grandmothers who might go out with me?”

He claims three of them quickly said they weren’t busy….

His honors continue to stack up.

When the state authorized high school graduation for WWII veterans, he crossed the stage with youngsters nearly 70 years younger. Recently, county commissioners renamed what was formerly the West County Annex Building in Janek’s honor. Now, they’re building a Galveston sports complex spanning several city blocks. Come April, they’ll name it for Eddie Janek, who loves his community as much as it loves him.

As you might expect, Janek claims his cup continues to “runneth over.”…

Don Newbury is the author of When the Porch Light’s On, a humorous and inspirational look at his life. Please click HERE to find the book on Amazon.