The Idle American: Life’s all about the flip of a coin. 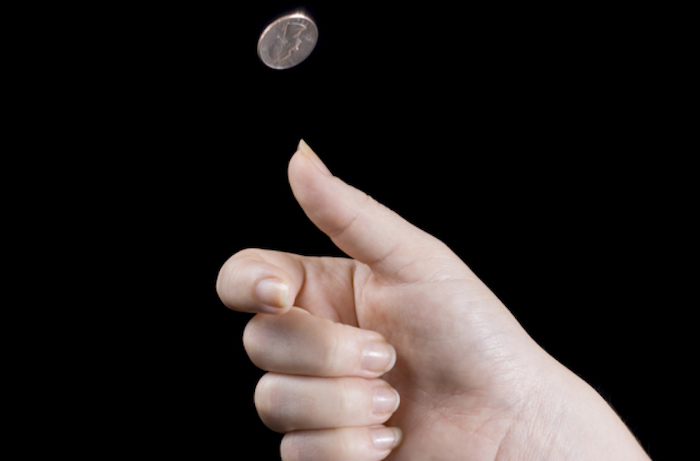 Yep, coin flips and luck of the draw determine many outcomes. There are, however, few absolute guarantees.

MY UNCLE MORT–described by his neighbors in the thicket as being “a couple of coats short of a paint job”–seems to be snagged on the horns of a dilemma. Or, maybe he’s suffering from delayed effects of dueling air horns blasting “back in the day” at Kyle Field.

“It wasn’t long ago that we didn’t have to fake excitement for the Texas Aggies’ football team. This was true during decades of competition with several other schools in the old Southwest Conference. And, with Thanksgiving at hand, we diehard fans have only memories of annual grudge matches with the University of Texas,” he laments.

For decades, he claims, “whoops, air horns and fans’ admonitions for the Aggies to ‘gig’ all foes in sight” greatly overshadowed Kyle Field hoopla these days. “Today’s crowd noise sounds more like chattering at Aunt Dinah’s quilting party, the one from which the guy was seeing Nellie home,” my 105-year-old uncle whines….

Ah, but another point must be added if a dilemma is to emerge. And here ‘tis: Mort says he’s not talking about “boxcar loads of fake news and ‘stuff’ passed off as the gospel” by social media.

Instead, he thinks Aggie big-wigs may be resorting to an age-old standby method–intentional changing of subjects.

They figure conversations need to be diverted from a lackluster football season to other things….

“Aggies want to talk about ratings, but not football ratings,” Mort opines. “So the big news from Texas A&M is about the U.S. News and World Report ranking the university’s law school among the top 100 in the land.”

He points out that the Aggies have owned the law school for only four years since buying it from Texas Wesleyan University. He says this gives Aggie backers a different ranking to brag about. “Aspiring lawyers and football players can wave to each other as they pass,” he joked. “One bunch on the way up, and the other on the way down.”

As usual, Mort’s not sure what to believe. He allows that he may simply “flip a coin.” Flip it, I say, there’s no law agin’ it.….

Coin-flipping, by the way, becomes more complicated with the announcement by the corporation with 70 Dairy Queens in Texas, Oklahoma and New Mexico that it is shuttering almost half of its stores.

At this time of year, coaches and superintendents of football playoff bound high schools often meet at halfway-point Dairy Queens for coin flips to determine where games will be played.

They still talk about an historic 1940s coin flip that determined where the basketball playoff game between Rankin and McCamey would be played. Rankin, with tall, beefy players, hardly ever lost in its gymnasium. The old structure’s ceiling was exceedingly low, making outside shooting improbable, if not impossible.

Outside shooting, though, was the McCamey specialty, and its gym had a high ceiling.

Coaches and superintendents from the schools met in a dimly-lit Rankin office–a single bulb hanging from the ceiling–for the coin flip that would determine the playoff game site. All of them realized whichever way the coin fell likely would determine the district champion. A half-dollar was flipped; it landed in a crack of the old wooden floor. Its roll was dictated by the crack that meandered under an old desk. Coaches and administrators scrambled under the desk–learning in the near darkness and on all fours–that McCamey won the flip, and, a few days later, the game….

Yep, coin flips and luck of the draw determine many outcomes. There are, however, few absolute guarantees.

The sign on an auto repair shop, perhaps owned by a Texas Aggie, includes an important proviso.

It reads:  “We Fix Suspensions–Unless You Are Ezekiel Elliott.”…

Don Newbury is the author of When The Porch Light’s On, the humorous and inspirational story of his life and the life around him. Please click HERE to find the book on Amazon.