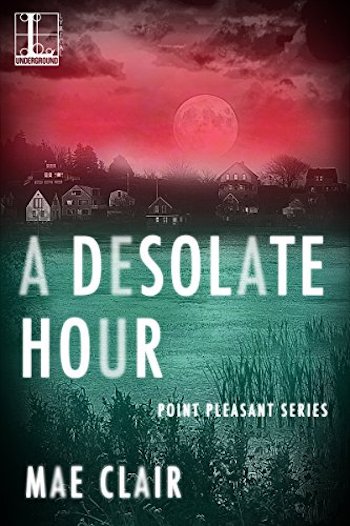 In this supernatural tale, can they beat the clock to break the curse before the Mothman takes his ultimate revenge?

Sins of the past could destroy all of their futures . . .

For generations, Quentin Marsh’s family has seen its share of tragedy, though he remains skeptical that their misfortunes are tied to a centuries-old curse. But to placate his pregnant sister, Quentin makes the pilgrimage to Point Pleasant, West Virginia, hoping to learn more about the brutal murder of a Shawnee chief in the 1700s. Did one of the Marsh ancestors have a hand in killing the chief—the man who cursed the town with his dying breath?

While historian Sarah Sherman doesn’t believe in curses either, she’s compelled to use her knowledge of Point Pleasant to uncover the long-buried truth. The river town has had its own share of catastrophes, many tied to the legendary Mothman, the winged creature said to haunt the woods.

But Quentin’s arrival soon reveals that she may have more of a stake than she realized. It seems that she and Quentin possess eerily similar family heirlooms. And the deeper the two of them dig into the past, the more their search enrages the ancient mystical forces surrounding Point Pleasant.

As chaos and destruction start to befall residents, can they beat the clock to break the curse before the Mothman takes his ultimate revenge?

When I find an author whose work I like, I read the whole backlist as fast as I can. I’ve read everything the talented Ms. Clair has to offer and have waited (quite impatiently) for this final installment of the Point Pleasant series.

I was not disappointed. It was SO worth the wait.

A DESOLATE HOUR manages to intertwine the distant past with the book’s present (the 1980s), an advanced planet with our own fragile one, and aliens and witches with human residents of a cursed town. Not only does this all come together seamlessly, it does so while introducing new and interesting characters and revisiting old favorites, solving an intricate mystery, ending a centuries-old curse, and wrapping up all the loose ends in a heart-wrenching and bittersweet way.

I prefer character-driven fiction, and this novel—this series—fits that mold. As was the case with the first two books, I’m still smitten with Caden Flynn in this story. He’s my favorite of the returning cast, but all the protagonists through the series are multifaceted and likable. The antagonists have legitimate motivations behind them, making them realistic and believable. And then there are the characters whose motivations and intents were hazy… I may have loved them most of all. A surprise revelation at the end was a punch to the gut; it’s a poignant resolution I’ll not soon forget.

A DESOLATE HOUR features genuine characters and intricate plotlines, fast-paced action and eerie, palpable settings. I was sucked in with the first word and read the whole novel in one afternoon, desperate to see how it all ended and left breathless when I finished. I highly recommend this book, this series, and this author to fans of this genre.

Quentin Marsh was a musician until an accident crushed his hand to where he will never be able to play the same way again. Now working in the family business with his twin sister Quentin finds himself heading to Point Pleasant, West Virginia on the request of his sister to find out more about their family line. Quentin’s sister has just found out she’s pregnant with twins and a psychic has warned her that the twins in her family line have all been cursed and after Quentin’s accident they both can’t just ignore the warning.

Sarah Sherman is the local historian in Point Pleasant so when Quentin arrives he finds himself directed to Sarah to find out more about his family history. While most people would find the talk of family curses a bit strange and think Quentin was just a little on the crazy side Sarah is familiar with the history of Point Pleasant where the town has endured its own share of disasters over the years along with the legend of the Mothman, the winged creature said to haunt the woods.

A Desolate Hour is the third book in the Point Pleasant series by Mae Clair. While the series follows more along the lines of what you would find in the romance genre with changing the main characters in each read along with the plot focusing on new things I would still highly suggest reading the entire series in order. Each of the books builds upon the story that came before it and also the previous characters and events still play a huge part so I would think one would be a bit lost not knowing what had come in the previous books.

I absolutely love the story involved in the Point Pleasant series myself. It would be hard to categorize this series as it has so many elements added into each book with always including a bit of romance, a bit of mystery to solve mixed in with the supernatural wonders that surround this town and it’s residents. The story revolves around a real-life event that took place in the town but has added its own dark twists and turns all along and becomes more and more intense as each read takes place. Definitely, one that I’d recommend reading as with each story I’m never quite sure what to expect in Point Pleasant.

Please click HERE to find A Desolate Hour on Amazon.