Are words the most powerful weapon of all? 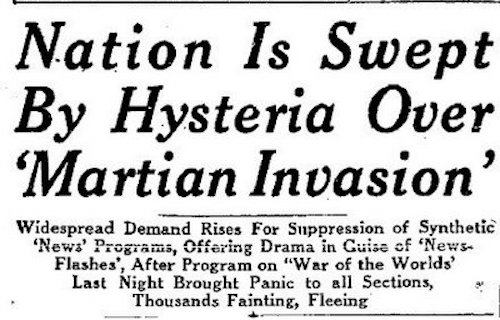 Orson Welles scared thousands into demoralization with nothing but the power of words and imagination.

IN REALITY, it was little more than a highly dramatized Halloween prank.

But when Orson Welles and his team of actors broadcast their own stylized version of War of the Worlds over CBS radio in 1938, they proved beyond all doubt just how powerful the written and spoken word could be.

Those who tuned into the weekly episode of the Mercury Theater of the Air on that Halloween night heard frantic newsmen breaking past the musical interludes of big dance band music with breathless reports about an invasion from Mars.

Does it sound ridiculous?

Did it sound ridiculous during the infancy of radio in 1938?

There was panic across the land.

People hid in their cellars.

So did the non-believers.

For a long time, they had been worried about Hitler and Germany.

But Hitler and Germany were on the far side of the big ocean.

The Mars invaders were on their doorsteps.

A Halloween fantasy had become reality.

The sound effects were chilling.

And each word spoken was more powerful and more terrifying than the last.

As Dorothy Thompson wrote in the New York Tribune:

“All unwittingly, Mr. Orson Welles and the Mercury Theater of the Air have made one of the most fascinating and important demonstrations of all time.

“They have proved that a few effective voices, accompanied by sound effects, can convince masses of people of a totally unreasonable, completely fantastic proposition as to create a nation-wide panic.

“They have demonstrated more potently than any argument, demonstrated beyond a question of doubt, the appalling dangers and enormous effectiveness of popular and theatrical demagoguery.

“Hitler managed to scare all of Europe to its knees a month ago, but he at least had an army and an air force to back up his shrieking words.

“But Mr. Welles scared thousands into demoralization with nothing at all.”

Nothing but words, words that could draw good, honest, hardworking citizens into a world of delusional fantasy.

Dorothy Thompson looked down a distant historical road and, more than anyone, understood just how men could use the power of mass communications to create theatrical illusions and manipulate the public.

What did she fear most?

Her greatest concern was that the power would one day fall into the hands of the politicians.

They could say anything.

People would believe anything.

It would all begin with the written and spoken word.

And she was right.

So if you’ve grown tired of the political diatribes flooding the radio and television airwaves this election season, just blame Orson Welles.

He would be proud.