The Man Who Turned Pulp Fiction into Literature

The greatest mystery of all was how Raymond Chandler was able to transform himself from an English Edwardian literary critic and poet to a hard-boiled writer of pulp fiction.

It was Raymond Chandler’s theory that the detective story was a tragedy with a happy ending.

He wrote: “What readers are looking for without realizing it is not that a man got killed, but that in the moment of death he was trying to pick a paper clip up off the polished surface of a desk, and it kept slipping away from him so that that there was a look of strain on his face, and his mouth was half opened in a kind of tormented grin, and the last thing in the world he thought about was death. He didn’t even hear death knock on the door. That damn paper clip kept slipping away from his fingers, and he just wouldn’t push it to the edge of the desk and catch it as it fell.”

It was said that Chandler wrote deliberately and with a sense that even in the most disposable pulp story, quality was non-negotiable. He believed that a good story could not be devised. It had to be distilled.  And he said, “When a book, any sort of book, reaches a certain intensity of artistic performance, it becomes literature.” 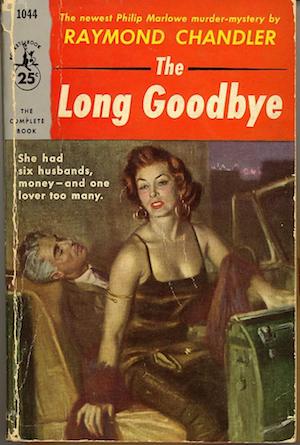 He had been a literary career.

But the quality of his work was couched in potboiler mysteries printed in pulp fiction magazines.

He had make a living.

He had to survive.

At the age of forty-four, after tainted careers as a literary reviewer, poet, newspaper man, and independent oil executive, Chandler, found himself fired and on the streets as the clouds of the Great Depression spread their grim shadow across the land. It seemed that he drank too much and too frequently.

He changed his entry in the Los Angeles phone book to “Writer” and signed up for a correspondence course on how to be one. He wrote and sold his first story, Blackmailers Don’t Shoot” to a pulp magazine called Black Mask.

Yet, the greatest mystery of all, some said, was how Chandler was able to transform himself from an English Edwardian literary critic and poet to a hard-boiled American writer of pulp fiction.

Some critics believed that the writer developed his distinctive style by using American spoken English and vernacular for dialogue and British English sentence structure for description.

Raymond Chandler offered these thoughts to mystery writers in a 1950 essay:

“The realist in murder writes of a world in which gangsters can rule nations and almost rule cities, in which hotels and apartment houses and celebrated restaurants are owned by men who made their money out of brothels, in which a screen star can be the fingerman for a mob, and the nice man down the hall is a boss of the numbers racket; a world where a judge with a cellar full of bootleg liquor can send a man to jail for having a pint in his pocket, where the mayor of your town may have condoned murder as an instrument of moneymaking, where no man can walk down a dark street in safety because law and order are things we talk about but refrain from practicing; a world where you may witness a hold-up in broad daylight and see who did it, but you will fade quickly back into the crowd rather than tell anyone, because the hold-up men may have friends with long guns, or the police may not like your testimony, and in any case the shyster for the defense will be allowed to abuse and vilify you in open court before a jury of selected morons, without any but the most perfunctory interference from a political judge …

“In everything that can be called art, there is quality of redemption. It may be pure tragedy, if it is high tragedy, and it may be pity and irony, and it may be the raucous laughter of the strong man. But down these mean streets a man must go who is not himself mean, who is neither tarnished nor afraid.

“The detective in this kind of story must be such a man. He is the hero; he is everything. He must be a complete man and a common man and yet an unusual man. He must be, to use a rather weathered phrase, a man of honor, by instinct, by inevitability, without thought of it, and certainly without saying it. He must be the best man in his world and a good enough man for any world. I do not care much about his private life; he is neither a eunuch nor a satyr; I think he might seduce a duchess and I am quite sure he would not spoil a virgin; if he is a man of honor in one thing, he is that in all things.

“He is a relatively poor man, or he would not be a detective at all. He is a common man or he could not go among common people. He has a sense of character, or he would not know his job. He will take no man’s money dishonestly and no man’s insolence without a due and dispassionate revenge. He is a lonely man and his pride is that you will treat him as a proud man or be very sorry you ever saw him.

“He talks as the man of his age talks, that is, with rude with, a lively sense of the grotesque, a disgust for sham, and a contempt for pettiness. The story is his adventure in search of a hidden truth, and it would be no adventure if it did not happen to a man fit for adventure.

“He has a range of awareness that startles you, but it belongs to him by right, because it belongs to the world he lives in. If there were enough like him, I think the world would be a very safe place to live in, and yet not too dull to be worth living in.”

Raymond Chandler proved, more than anyone, that literature can be found in any genre, even in detective stories where the hero says, “I knew one thing: as soon as anyone said you didn’t need a gun, you’d better take one along that worked.”