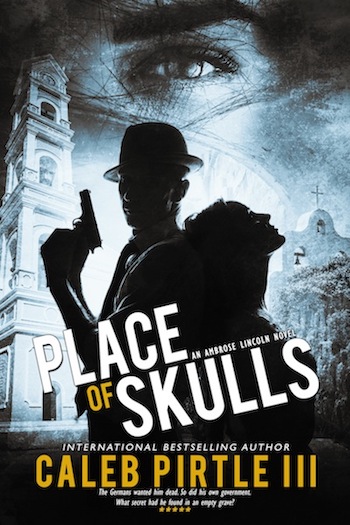 A man with no known past and no name has been dispatched to the deserts, ghost towns, and underbelly of drug-infested Mexico to uncover a secret that could forever change the scope and teachings of Christianity.

A DEA agent has written that he possesses the unmistakable and undeniable proof that Christ did indeed return to earth again and walk the land of the Aztecs almost fifteen hundred years after his crucifixion on the cross. But has the agent found a relic? An artifact? A long lost manuscript of the written Word? No one knows, and the agent dies before he can smuggle the secret out of an empty grave.

Ambrose Lincoln can’t dig past the charred fragments of his memory, but he must unravel the legend of Quetzalcoatl, the white-skinned, blue-eyed, god figure whose sixteenth century ministry, death, resurrection, and mystical promise to return someday to gather up his people closely parallels the Biblical story of the man called Christ. Is Quetzalcoatl merely a myth, or was he Christ himself?

Lincoln’s quest to find the answers, he becomes involved in a rogue CIA plot to invade Mexico and wage an unholy war on drugs, financed by operatives working for Hitler’s Germany. He finds himself pursued by the same mysterious assassin who struck down the DEA agent.

Does the artifact actually exist? Who possesses it now? Lincoln battles an unseen and unknown enemy in an effort to survive long enough to discover the truth. If he doesn’t, he knows that death awaits him on the desert sands of a land held sacred for centuries by the mysterious and holy ones.

One of the most satisfying literary discoveries is a truly unique story. This is particularly rare in the mystery-thriller genre. Many thrillers seem to be emulating another derivative book, trying to ride a bandwagon to market success. Far too many read as if the author were trying to write an episode of his or her favourite TV show.

So when I opened Place of Skulls by Caleb Pirtle III, I was prepared for disappointment. But what I found were realistic characters, solid writing and a satisfying, completely original story.

The plot twists and turns, but holds the road.

Place of Skulls is the fourth in Pirtle’s Ambrose Lincoln series, a spy-thriller set during the Second World War. A lot of authors give their main characters a huge character flaw—alcoholism, a history of abuse, a physical disability—and Lincoln has what seems to me to be the most debilitating for a spy: amnesia. Ambrose Lincoln has no memory of his past, and cannot remember why he knows the things he does and cannot account for certain skills he has, such as the ability to pick a lock with a hair pin.

But he does have ghosts—at least one. He’s followed by a dead man only he can see, and only at night, the ghost of a man he killed in a military engagement that he cannot remember.

A rich Dallas oilman named Eliot Bergner hires Lincoln to find whoever killed his brother, Danny. “Danny B.” is a DEA officer who was investigating the smuggling of drugs from Mexico into the U.S., carried by poor, desperate migrant workers. One night, his mutilated body arrives in Texas in an empty boxcar. But not before he sends a message to his brother, Eliot—an observant Jew—that he has found incontrovertible proof of Christ’s appearance in Mexico before the Spanish Conquest in 1492.

Drugs and religion: that would seem to be enough for one book, but then the author adds the idea that Nazi Germany is lacing the cocaine and heroine the migrants are smuggling with Thallium, a potent and undetectable poison. Their idea is to addict as many Americans as possible, and then kill them.

As if that’s not complex enough, shady U.S. government operatives are about to launch an invasion of Mexico to stop the influx of addictive poison, but because Mexico is a sovereign nation that, at the time the story is set, has not yet declared which side of the war it’s on (which would have to make it between December 7, 1941 and May 22, 1942, when Mexico declared war on Germany), they have to keep it secret, even from the President.

No, it’s not impossible to make this story plausible.

If any author had come to a publisher with an idea for a novel about a detective finding incontestable proof that Jesus Christ came to Mexico before 1492, and getting caught up in a US government plot to invade Mexico to throttle the drug trade, mixing in Nazi spies, he probably would have been advised to pick an easier mystery to pen. But Pirtle handles the challenge well, giving the readers just enough information as the plot builds to keep us readers turning pages.

There were a few places where I was afraid the novel would become excessively Christian, where a plot point could only be explained by a miracle or an answer to true faith, but thankfully, Pirtle avoided that. Everything made sense, and while there is a definite religious motif to this book, it makes sense.

Pirtle gives us a wide range of believable characters, all with strengths, weaknesses and flaws. I loved some of them, and detested others, but I reacted to each one. All their actions and reactions logically proceeded from their situations and personalities, with no unbelievable transformations. Eliot Bergner’s agonized family relationships add some surprising depth to the story. I suspected the femme fatale at first, but Pirtle’s iron-tight plot made her completely believable.

The author gives us a satisfying closing.

Pirtle also avoids a facile story arc. Lincoln struggles against drug cartels, traitors, cowards and ghosts, all of whom leave scars. At no point do we know for sure who’s going to survive the next battle, and it’s never certain who’s going to win.

Pirtle doesn’t cut corners. The book has been produced professionally, meeting or exceeding the standards of commercial fiction. In fact, this book was much better than the commercially published stuff I have read lately.

Find out more about Scott Bury and his books at his site, the Written Word, HERE.