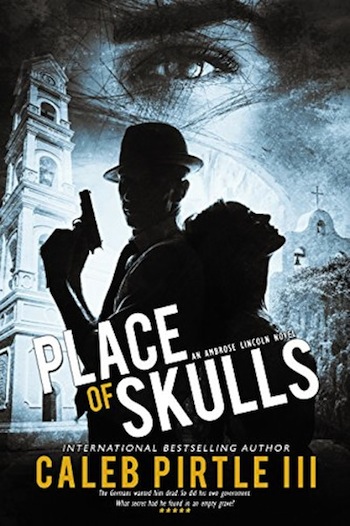 Pirtle’s imaginative and rich descriptions lend depth and color to the story of Ambrose Lincoln, a man haunted by a ghost who seeks his death.

Reviews are the adrenaline that keeps a writer going.

Sales may be disappointing.

The novel you’re writing may be rambling without an end in sight.

You wonder why you’re even going to the trouble of telling another story.

Then here comes a five-star review.

You can’t wait to finish one book so you can start writing the next one.

My Place of Skulls received that kind of review this week, and it was written by one of the country’s most talented thriller writers, Kelly Marshall. Her novel, Kiss the Girls and Make Them Die, may well be as good as any suspense fiction you’ll read all year or the next ten years.

It’s in a class of its own.

Kelly wrote in her review:

“Place of Skulls is the fourth book in the Ambrose Lincoln suspense series. I’ve read them all and this is my favorite by far.  Ambrose does the bidding of the US Government and assassinates on command. He is used and abused by his own government who then thanks him by electrocuting his memory into oblivion. He is a man alone, without family, without a home, without a memory.

“Caleb Pirtle III weaves literary magic like Copperfield holds his audience captive with a wave of his wand.  Pirtle’s imaginative and rich descriptions lend depth and color to the story of Ambrose Lincoln, a man haunted by a ghost who seeks his death.

“Here’s what I mean.  “He saw the moonlight filter through the jagged cracks in the windows, a mosaic of reds and blues, touched by a shade of yellow, as it reflected past the stained glass.”

“Here’s another. “The slender saber of flame on the red candle he held fluttered wildly and threw an odd assortment of colored shadows against the wall. The only sounds he heard were the distant trickle of running water and his own footsteps.”

“In Place of Skulls, Ambrose is hired to go to Mexico to discover who killed Danny B, a federal undercover agent trying to subvert the burgeoning drug trafficking into the United States. Mexico proves to be a dry, dusty piece of hell where friends and enemies alike sell you out for a few pesos.

“Danny B’s brother maintains the undercover agent was killed because he discovered ancient proof that Jesus appeared in the new world to save the souls of the Aztecs. Ambrose’s dual purpose is to kill the man who took Danny B’s life and to find verification that the Son of God did indeed return as He promised.

“Place of Skulls is a deeply satisfying book. I know I will read it again if only to feel the magic Caleb Pirtle III has woven in this tale of faith and intrigue.”

That kind of review will keep me going for a long time. 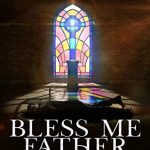