We loved the way he wrote, and we thought we knew how he wrote it, and we had no clue and no idea.

His was a wild, exuberant, and lonely ride. Jack Kerouac was trapped in a world of poverty and despair, passion and disappointment, and his words became the heart beat of the beat generation, a lost band of writers and poets who defied form and tradition, collected their miserable souls in the coffee houses of San Francisco, hit the open road with no place to go and no idea of how to get there, and celebrated in prose and poetry their rejection of middle-class America, which had been the roots of their own upbringing.

Kerouac’s mind was always adrift in a strange netherworld that only he could enter, and he dreamed curious dreams, sometimes on alcohol, sometimes on a psychedelic drug, and mostly because he was intent on mining the depth of his subconscious as coal miners stripped the lands of West Virginia. Kerouac may not have invented but he contributed mightily and heavily to the counter culture revolution of the 1960s.

He was the leader. And he had no idea why anyone was following him. His disciples became known as hippies, and Kerouac simply shrugged and said, “It is not my fault that certain so-called bohemian elements have found in my writings something to hang their peculiar beatnik theories on.” 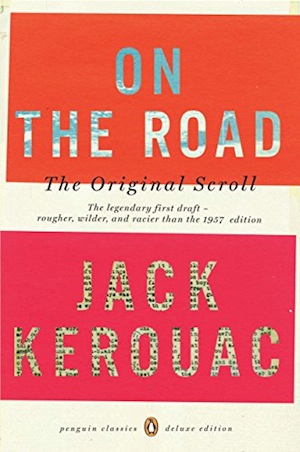 I grew up reading the words of Jack Kerouac. I was fascinated by his iconoclastic lifestyle and the rhythm and power of his words, although I seldom had any idea what they meant. His book, On the Road, became our national anthem.

We were mesmerized by such passages as: They danced down the streets like dingledodies, and I shambled after as I’ve been doing all my life after people who interest me, because the only people for me are the mad ones, the ones who are mad to live, mad to talk, mad to be saved, desirous of everything at the same time, the ones who never yawn or say a commonplace thing, but burn, burn, burn like fabulous yellow roman candles exploding like spiders across the stars and in the middle you see the blue centerlight pop and everybody goes ‘Awww!

Kerouac had found the right pod of peyote. We were still sucking juicy fruit gum. But we loved the way he wrote, and we thought we knew how he wrote it, and we had no clue and no idea.

Jack Kerouac, back in the beginning, had been inspired by the radio show, The Shadow, and the fervid novels of Thomas Wolfe. He tried to copy Wolfe’s style in his first novel, The Town and the City. The critics saw merit in his words. Readers shunned it. Fame crept quietly away, and Kerouac was broke.

He became a wayward vagabond, not much more than a 1950s hobo, traveling aimlessly across the country and experimenting with a freer form of writing. Kerouac wrote On the Road exactly the way he pulled the events out of his mind, never pausing long enough to edit, fictionalize, or even think about the words pouring onto the page. He spilled them out as he thought them.

He wrote the book in three weeks, and he had no intention of revising his novel. He regarded revising as a form of lying. And he sent the manuscript to his editor on an unbroken roll of tele-type paper – a single sheet that stretched a couple of blocks long.

The editor had no idea what to do with it, so he did what all good editors do when they sit in the dark, unable to share the vision. He rejected it.

Jack Kerouac kept writing novels, and he wrote several of them during the 1950s. He carried them in an old rucksack, wondering if they would ever see the light of day as he connected one country road with another, finally following the beat poet Allen Ginsberg to the drug-induced, smoke-filled, free-thinking, do-what-you-want-as-long-as-you-don’t-get-caught coffee houses of San Francisco.

It took seven years before a publisher was willing to gamble with On the Road. The New York Times wrote of the book: “It immediately became a basic text for youth who found their country claustrophobic and oppressive. At the same time, it was a spontaneous and passionate celebration of the country itself, of ‘the great raw bulge and bulk of my American continent.’”

Those who had rejected Kerouac now saw him as a literary innovator. And he kept right on drinking and right on writing. He was excessive with both. He once said, “I want to work in revelations, not just spin silly tales for money. I want to fish as deep down as possible into my own subconscious in the belief that once that far down, everyone will understand because they are the same that far down.”

Kerouac simply opened up his mind and let the words flow. It was as though he slashed his wrists and the words he bled became the words in his books.