John Grisham on Writing One Page a Day

No other publisher dared to release a book if it might be forced to compete with Grisham’s newest work.

John Grisham had toyed with the idea of becoming a writer someday, but that was in the ninth grade, so it didn’t count. He became a lawyer instead. Didn’t like it much. Worked too hard. The hours were too long. Besides, there wasn’t a lot of money being a public defender in a small Mississippi town where the poor, especially the black and poor, couldn’t afford the best and never had much of a chance of winning.

In an interview with Nicholas Wroe of the Guardian, he recalled, “I represented real people, poor people, who often couldn’t afford to pay a lawyer, but still had problems. Directly across the street from my office were insurance companies, banks, and big corporations. It was a very clear line between us, and I learned very quickly who my friends were.”

He didn’t like it, but being a lawyer changed his life. 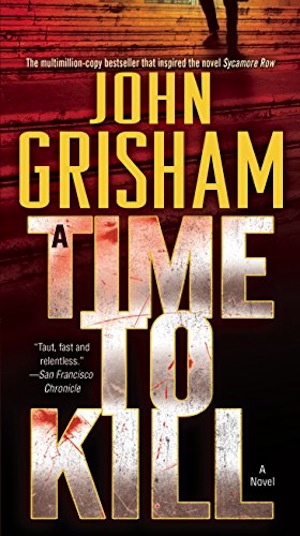 John Grisham was only a bystander, but he was in the courtroom when a twelve-year-old girl testified about her rape. She was ashamed, embarrassed, and horrified. He turned and looked at the girl’s father and tied to imagine what would happen if he took matters into his own hands?

What if he turned his back on the court system?

What if he took his own measure of revenge?

How would the law respond?

What would society say?

The thoughts refused to leave him. He said in an interview with the Academy of Achievement: “I was doing a lot of courtroom work. I was a very young lawyer, but I was handling a lot of court appointed criminal cases, in trial a lot. And I knew the criminal system, and I knew a lot about it. And so I came up with a story about a murder trial, and some of it was based on personal experience. Most of it was not. And I kept telling myself that I would like to be the lawyer who defended a father who murdered the two guys who raped his daughter. I think it would be a fascinating case. One thing led to another, and I was sort of consumed with this story. And one night I just said, ‘Okay I’m going to try to capture it, see what I can do with words.’ And that’s what happened.”

The writing of A Time to Kill took him three years. Grisham remembered what his ninth grade teacher told him when he announced to her that he wanted to be a writer, she told him: “Write what you know, and write every day.”

He forced himself to write every day.

Grisham would roll out of bed at five o’clock every morning, head down to his office, which was five minutes away, and write until seven. He wanted to write at least one page a day. Some days it took ten minutes. Some days it took the full two hours. On many mornings he doubted that he would ever finish it.

A time to Kill found a small publisher but not audience at all. In desperation, Grisham bought five thousand copies and sold them out of the trunk of his car. He had a book but little else. He remembered, “When I stated, my motives were pure. I was not driven by greed or money. I had a story. It was a courtroom drama.”

He kept writing, stealing whatever time he could from his law practice. And two years later, he wrote the final paragraph to The Firm.

It was an immediate blockbuster. When it hit the New York Times bestseller list at number twelve, he clipped the list from the newspaper and stuck it to his office wall. He did the same thing for the next forty-four weeks.

As Grisham said, “My first publishing experience was entirely normal, and my second entirely abnormal. I responded much better to the second experience than I did the first.”

He was working on his third novel, The Pelican Brief, knocking it out a page a day, maybe two pages on a good day, when, Grisham said, he received the most important advice he ever received. It came from the most unlikeliest of sources.

He was at a book signing when a very young executive with the chain happened to mention to him in passing, “The big guys come out every year.”

He was talking about Tom Clancy and Stephen King and Ken Follett and Michael Crichton. John Grisham wanted to be among the big boys. He understood the value of coming out with a new book like clockwork, year after year.

He went home, locked himself inside for sixty days, and finished The Pelican Brief. Exactly a year later, he published The Client, and those books placed the name of John Grisham on everybody’s bestseller list. By the 1990s, Grisham Day in bookstores, large and small, became a fixed point of the publishing year. No other publisher dared to release a book if it might be forced to compete with Grisham’s newest work. Such a conflict would be an immediate recipe for disaster.

As he said, “My name became a brand, and I’d love to say that was the plan from the start. But the only plan was to keep writing books. And I’ve stuck to that ever since.” They would earn him more than six hundred million dollars.