Jim H. Ainsworth: A sense of place in Circle of Hurt 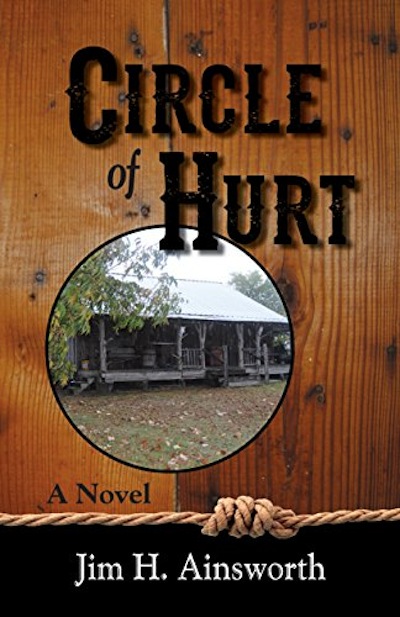 The only requirement for membership is to have been deeply hurt or to have caused serious hurt to others.

They gather around a big table in the back of Prigmore’s General Store and Café in downtown Riverby several times a week most weeks. There are six of them, five men and one woman. There may have been more or less in the past. There are no programs or speakers. Those outside The Circle wonder what they talk about, but they don’t ask. The only requirement for membership is to have been deeply hurt or to have caused serious hurt to others.

Tee Jessup is not a member of The Circle, but he qualifies. He spends a lot of time on the porch of a dilapidated farm house on a hill, feeling sorry for himself over the loss of his parents, his brother and his wife. He dreams of taking revenge on the man responsible for his wife’s death, but he can’t take the vengeance he craves because he has a young son.

Just down the hill from Tee’s home sits a long-abandoned shack. Decades earlier, it was used as a shelter for itinerant cotton pickers during harvest season. Clayton Dupree stayed in the picker shack when he was a boy. Now he has secretly returned to write his songs, paint his pictures, play his guitar, record everything that happens around him, and nurse a bullet wound.

An interview on KETR Radio.

What about the places in Circle of Hurt—are they real locations?

Riverby is real, yet fictional. The real Riverby is on Farm Road 100 twenty miles northeast of Bonham and two miles south of the Red River in extreme northeastern Fannin County. It apparently developed around a school established for the children of tenants from the nearby Morgan and Goss plantations. By 1936, when the first population statistics for the community were reported, Riverby had twenty residents and one business. Its population remained the same, although it reported no businesses after the mid-1940s. From 1977 through 2000 Riverby reported a population of fifteen.

I had never heard of Riverby until about fifteen years ago when I visited a team roping facility there and enjoyed a meal with the cowboys on a Riverby Ranch.

My fictional Riverby is a small town, but not that small. It is based on physical characteristics of the town squares of Commerce, Cooper, and Honey Grove—maybe a little Ladonia thrown in. It is called Riverby because it is by the Red River. The fictional town in this book is geographically close to where the real Riverby is.

Honey Grove likely provided the primary inspiration, because the old buildings downtown are truly unique. Also, some of the characters were inspired by people I knew who lived in Honey Grove. I found these people to be fascinating in real life and I hope they are equally fascinating in fiction.

Scenes outside of town, (and there are many) are primarily based on the area around Klondike in Delta County.

What about Prigmore’s General Store? Is it real?

Prigmore’s is loosely base on Silman’s on the downtown square of Cooper. It was a hardware, grocery, and general supply store complete with lunch counter. There is also a lot of Adrian Mercantile thrown in. This Panhandle store leaned toward the rustic, cowboy, farming way of life where fresh hides were often seen on the porch and the inside smelled of harness and tack and feed. You can really get a feel for the place that is no longer there in Rivers Ebb.

Is there really a place known as Hurt Hill?

Yes, there was and is, but you would need a guide (or me) to find it now. I especially remember an old well hand pump in the front yard that remained there long after the house was abandoned. My father leased land just west of Hurt Hill late in his life and leased bottomland west of the hill when I was a boy. I remember helping him (mostly watching and fetching) dynamite stumps in the bottomland and planting cotton there. I picked a lot of cotton in the field where pivotal scenes in the book take place.

This scene from Rivers Flow, my 2004 novel, also takes place in those bottoms east of Hurt Hill:

The bottoms were different in daylight. Humidity, copperhead snakes, and mosquitoes were more of a threat than panthers. It was still dark in the deepest part of the woods, but Blue Bottom creek was dry enough for Jake to hide in. Today, he was big brother, and he liked that role better than being little brother. As he looked over the creek bank, Jake saw a small cottontail rabbit hop up and sit between Tuck’s legs.

When he opened his eyes to look for Jake, Tuck saw the rabbit and smiled. Jake looked toward his parents to see if they were watching. They were not, so he began easing his way around the cotton field to tell them without disturbing the rabbit. As Jake approached, Rance downed the last of his iced tea and leaned back on one elbow. Mattie straightened the ragged quilt they were using for their picnic then lay her head against Rance’s thigh. Jake held one finger to his lips and pointed toward Tuck.

Mattie sat up to get a better look. “Just look at that.” She pointed toward her son. A small squirrel had moved to the other side of Tuck, sat back on its haunches, and intently watched the small boy. Tuck paid little heed to the squirrel or the rabbit, but seemed to welcome their presence. As he started toward the woods to find Jake, the rabbit and squirrel followed. Jake looked at his parents and shrugged.

Was there really a picker shack and a farmhouse on Hurt Hill?

Yes. I used to pick cotton (pull boles) in the bottomland just below it. I remember migrant workers staying in that shack one of the years we harvested cotton there.