Writing a classic with a pocketful of dimes 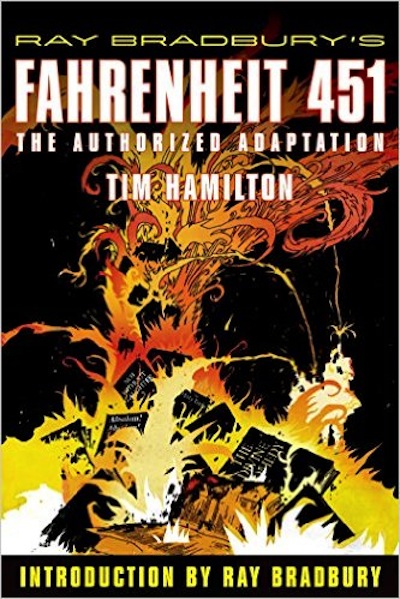 Ray Bradbury was a literary sensation, writing strangely lyrical prose with the touch of a poet, telling stories that simmered with melancholy and nostalgia.

Ray Bradbury gained fame as a science fiction writer, which is odd. Ray Bradbury didn’t write science fiction. He was simply a great writer, a great storyteller, and he merely chose to tell stories about other places and other times. He was, as one critic aptly pointed out, much more interested in the fiction than the science. Technology took a back seat to the loves and struggles, tragedies and triumphs of mankind.

As Bradbury once explained, “I’ve tried not to predict, but to protect and prevent the future.” In reality, he wanted to convince people to stop what they were doing in an effort to change the present, which, in turn, would change the future for the better.”

At the age of sixteen, Ray Bradbury was rummaging around piles of old novels in a second-hand bookstore when he discovered a handbill promoting weekly meetings of the Los Angeles Science Fiction Society. He loved the works of Edgar Allan Poe, he had read Edgar Rice Burroughs for years, he had a collection of Buck Rogers comic books, he figured he might as well attend. He did, hanging around such science fiction luminaries as Robert A. Heinlein, Leigh Brackett, and L. Ron Hubbard, who would turn his science fiction philosophies into the religion of Scientology.

He knew from that moment on that he wanted to write.

He began sending short stories to the pulp magazines of the 1930s and 1940s, such as Weird Tales and Astounding Science Fiction. He began a ritual that would never end, turning out one new short story a week. The only thing more prolific than his writings were the rejection notices he received.

One of his short stories had been rejected by Weird Tales so, with nothing else better to do, he submitted “Homecoming” to Mademoiselle. It landed in the slush pile of rejections but was rescued by a young editorial assistant who believed that the writer possessed enormous talent.

He gave Ray Bradbury the break he needed The editorial assistant’s name was Truman Capote. “Homecoming” went on to win a place in the O. Henry Prize Stories of 1947.

It wasn’t until he was thirty years old that Bradbury decided to write a novel. He had little money. He had a wife and two babies. His wife had quit her job, and Bradbury knew he needed to bring home a paycheck of some kind.

While wandering around the UCLA library, he discovered a typing room that rented out typewriters. For ten cents, he could type for thirty minutes. So Bradbury began gathering up a bag of dimes. He sat them on the table, and, with one dime at a time, began writing Fahrenheit 451.

He told the Paris Review: “With Fahrenheit 451, Montag (his lead character) came up to me and said, I’m going crazy. I said, What’s the matter, Montag? I’ve been burning books, he said. Well, don’t you want to anymore? He said, No, I love them. I said, Go do something about it. And he wrote the book for me in nine days.”

Of course, Bradbury had to finish in a hurry. He was running out of dimes.

The literary world thought it was science fiction. It wasn’t. Bradbury said, “You’re dealing with book burning, a very serious subject. You’ve got to be careful you don’t start lecturing people. So you put your story a few years into the future and you invent a fireman who has been burning books instead of putting out fires – which is a grand idea in itself – and you start him on the adventure of discovering that maybe books shouldn’t be burned. He reads his first book. He falls in love. And then you send him out into the world to change his life. It’s a great suspense story, and locked into it is this great truth you want to tell – with pontificating.”

Of course, he said, there were worse crimes than burning books. One of them, he said, was not reading them.

Bradbury had once been called “the poet of the pulps.” Now he was a literary sensation, writing strangely lyrical prose with the touch of a poet, telling stories that simmered with melancholy and nostalgia.

He said, “I write all the time. I get up every morning not knowing what I’m going to do. I usually have a perception around dawn when I wake up. I have what I call the theater of the morning inside my head, all these voices talking to me. When they come up with a good metaphor, then I jump out of bed and trap them before they’re gone. That’s the whole secret: to do the things that excite you. Also, I always have taken naps. That way, I have two mornings. My stories run up and bite me on the leg. I respond by writing down everything that goes on during the bite. When I finish, the idea legs go and runs off.”

He has given this advice for writers:

* Write with Zest. If you are writing without zest, without gusto, without fun, you are only half a writer. For the first thing a writer should be is excited.

* List Ten Thing You Love and Ten Things You Hate. Then write about the former and “kill” the latter – also by writing about them. Do the same with your fears.

* Write for Kids. Do you know why teachers use me? Because I speak in tongues. I write metaphors. Every one of my stories is a metaphor you can remember. The great religions are all metaphors. We appreciate things like Daniel and the lion’s den and the Tower of Babel. People remember these metaphors because they are so vivid you can’t get free of them, and that’s what kids like in school. Other writers wrote in metaphors: Edgar Allan Poe, Herman Melville, Washington Irving, Nathaniel Hawthorne. All these people wrote for children. They may have pretended not to, but they did.

Ray Bradbury had a simple creed about the life he lives. He said, “If we listened to our intellect, we’d never have a love affair, we’d never have a friendship, we’d never go into business because we’d be cynical. Well, that’s nonsense. You’ve got to jump off the cliffs all the time and build your wings on the way down. Work is the only answer. I have three rules to live by.

“One, get your work done.

“If that doesn’t work, shut up and drink your gin.