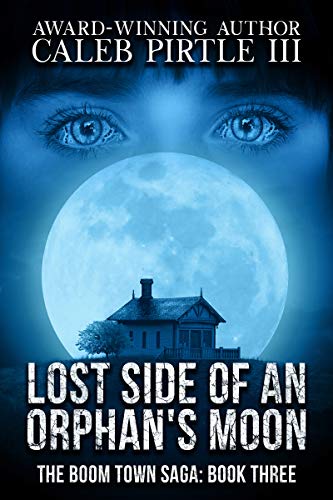 Can Doc, the charming and lovable con man, and Eudora, the beautiful widow, catch a killer before they find out who’s the next to die?

Was it a crime of passion?

Did she reject him?

Ashland is a town without law. It is threatening to explode from the mass of humanity crowding into the oilfield. Is the death of the fancy dancer only the first? And can Doc, the charming and lovable con man, and Eudora, the beautiful widow, catch a killer before they find out who’s the next to die?

Author Caleb Pirtle III is a master at drawing readers into his stories. His characters are well developed with great interactions. Book three of this series takes place in an oil town in East Texas that really has no law. The backdrop of the Great Depression works for this historical fiction. The descriptions of people, places, and things are so vivid you can touch them.

Two characters resonated with me. Eudora who struck it big in oil and runs the town newspaper. The other is the child she rescues from the train and takes under her wing, Ollie Porter. These two create a bond nearly immediately that, as a reader, I prayed would last.

Ollie is looking for his father because his mother died. He is not even a teen yet but traveling from train stop to train stop searching in the oil fields on his own. Eudora has a complicated life with a history, like most of us. Helping a child becomes her mission, as much as publishing the facts in the town paper.

A woman, Louise Fontaine, is killed in the middle of the night. Much of the story centers around why was she killed and who would have done it. The description below made the murder of this young woman even more tragic.

She was lying on her back, staring up with open eyes at the rain showering down from a dark sky as gray as the pistol in Johnny B.’s hand. Her face could have been molded from wax, and all color had been washed from her eyes. They had turned as while as fresh buttermilk. She had a purple bruise just below her left eye, and the bullet hole above the top button of her silky red dancing dress was black and ugly, caked with mud and coal dust spilling from the trains rolling into Ashland. Any traces of blood had soaked with the rain into the bare ground beneath her. But even after lying in the rain all night, her blonde hair was perfectly combed, not a hair out of place.

I recommend this story for the historical richness as well as my appreciation for the hardship endurance of people in those times. It would make interesting reading in high school, but ideal for young to adults who love solving mysteries. You’ll love the surprise ending that solves the mystery.

Eudora Durant owned three operating oil wells in Ashland. She could have lived in the high society of Dallas, Texas, but she chose to remain where the economy needed her wealth, and her person to look out for those who passed through the rough town seeking jobs, as well as for those who lived there because they needed someone who cared.

One day, Eudora watched as the train rolled into the Ashland station, its whistle sounding like a dirge, adding to the dark melancholic mood of the town. She watched as a young boy descended the steps of a railroad car. He was alone. She heard Ollie Porter’s story and it touched Eudora’s heart. He had come a long way looking for his daddy, whom, he was told, worked in the oilfields somewhere.

Ollie’s mother had recently died and friendly women had bought a ticket for Ollie to ride the rails, searching for his father’s whereabouts. The trouble was that Ollie told Eudora his daddy didn’t know he had a son because he had left home before Ollie was born, promising to return someday. “Someday” still hadn’t come twelve years later. The boy carried a picture of his father, the only identification he had of the man.

Louise Fontaine was a dancer at Maizie Thompson’s Sporting House, a dancehall opened every evening for the men in town to come and pay ten cents a dance to whirl around the dance floor with one of Maizie’s girls. Louise was a favorite. She wore a red dress and red dancing shoes. But Louise was murdered and no one knew who committed the crime, nor why it was committed to such a beautiful young girl.

Waskom Brown, who had a dubious history of his own before he arrived in Ashland, became the town’s Constable, the sole peace-keeper of the law. The people wanted a Sheriff, but Waskom claimed every Sheriff got killed, so he refused to be called “Sheriff Brown.” “Constable” seemed to be the safer title, and that’s what he told everyone to call him.

Caleb Pirtle has woven an intricate story centered around Eudora, Ollie, Waskom, and Louise that takes the reader into the minds and hearts of those people. Why is Eudora so fascinated and interested in Ollie as he searches for his father? What will happen to the boy if his father, Oliver Porter, can’t be found in Ashland?  What if Constable Waskom Brown can’t solve the nearly perfect crime that shortened Louise Fontaine’s life?

Other characters emerge throughout the story to add realism and interest to the events. Reverend Tatum Montgomery, who has a traveling tent revival business, employs a beast of a man, ugly in appearance with a hunchback and a booming voice that quotes Scripture to those who come to be saved. Homer Lovejoy, the town barber and mortician prepares Louise’s body for burial; Shanks Warren, pastor of the local church; Faye Marie, typesetter and reporter for Eudora’s newspaper, all play a part in Louise’s story.

All books in this trilogy stand out in their portrayals of characters, historical settings, and events. Pirtle’s craft in linking the three stories speaks of his talent in giving the reader numerous enjoyable moments.