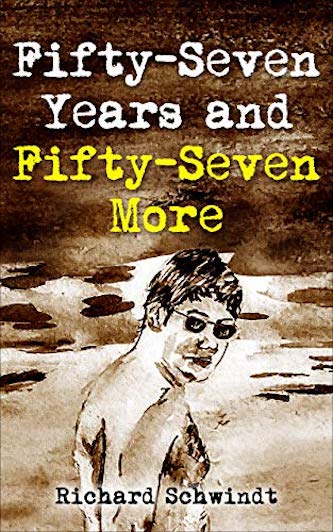 Just when you have all the loose ends carefully threaded into place, they are already starting to unravel on you.

I look at the newspaper laid carefully on the table; the Toronto Telegram. The date is March 3rd, 1960…

What am I doing here?

“You will live until March 2017; at which time you will return to the life you have left.”

How do I re-live my life without career, friends, and family?

Who do I turn to?

How do I adapt to this foreign … place.

I sidle up to the bar…the bartender, heavy-set, unshaven, smiles at me.

From an award-winning writer; a memoir of a life lived again; the moving and hilarious story of a man moved out of time – twice.

Richard Schwindt says his new book, Fifty-Seven Years and Fifty-Seven More is a story about time travel, and it is.

But not in the usual sense.

No damsels in distress.

No charges of the light brigade.

No outlanders wandering through the mountains looking for love and war.

It has moments, more than a few of them, that will shock and stun you.

Just when you have all the loose ends carefully threaded into place, they are already starting to unravel on you.

Fifty-Seven Years and Fifty-Seven More is the story of Richard George Sutton, a normal guy with a good job, loving wife, children, and reaching the age of 61.

But he awakens one morning in a house that’s unfamiliar to him in a town he knows nothing about, and he’s alone, really alone.

He looks in the mirror.

He doesn’t see a face he easily recognizes.

The life he knew has ended.

He’s beginning a new one.

He has no idea what happened or how it happened. He only knows what the lawyers tell him. “You are apart from the life with which you are familiar, and must remain so. You will live until March 2017, at which time you return to the life you left. You must not have contact with or influence any of your love ones, family, or acquaintances for the duration, nor should you participate in activities that have the potential to alter the timeline of history.”

But there’s nothing he can do about it.

He attaches himself to an eclectic and fascinating group of friends who certainly don’t understand him. He knows too much. He especially knows too much about the future and never explains why. Their gatherings remind me of Hemingway’s band of misfits in The Sun Also Rises.

And Richard is forced to live again through the days he dreads most. He feels a sense of foreboding when he awakens on the morning of November 22, 1963. He knows a President will be dead before the day ends. He is sick the morning of September 11 as he awaits the planes that once more strike the World Trade Towers. And he’s forbidden to warn anyone.

He faces the tragedy of a war in Vietnam, the horror of AIDS, the loss of friends. And he forges ahead until March 17, 2017.

And he begins all over again.

Think the story is mind-bending now?

You won’t believe what happens next.

Fifty-Seven Years and Fifty-Seven More could use a good editor, but it is a story I would have loved to write. I just don’t have the imagination of Richard Schwindt. If you don’t grab a copy, it’s your loss.